Sorry for the silence on the blog this past couple of weeks. It has been an eventful time, though not in the way hoped. My two-year old daughter was admitted to the hospital as soon as I reached Christchurch. She has a bone infection in her spine. Instead of catching a plane to Antarctica, I caught one back to Seattle. She is out of the hospital and recovering as well as we could hope, but I won’t get to join my team at Hercules Dome this year. I have no doubt that they will have a successful field season revealing the structure of Hercules Dome and I look forward to going next year.

Hercules Dome is about 250 miles north of South Pole. It’s in the direction of the Antarctic Peninsula and South America and labeled HD in the map below (with a bunch of other ice core sites which might get mentioned over the course of these blog posts).

Is Hercules Dome named after airplanes used to move people and stuff all over the continent? The Air National Guards flies LC-130s, which specialized versions of the C-130 Hercules aircraft for polar field work. The Hercs can be fitted with skis and able to land both on groomed runways and on smooth portions of the open ice sheet. So maybe Hercules Dome is named because it’s a nice place for Hercs to land. To my knowledge, no Hercs have landed there, but it is flat and minimally affected by wind, so early pilots may have recognized it as a potential emergency landing strip.

We are headed to Hercules Dome to determine where best to drill an ice core. In future posts, I’ll explain how we look through the ice to the rock underneath; how we look at the ice itself; how we will model how the ice flow; and lots about what goes into doing Antarctic field work.

I’ve posted plenty about life at the South Pole, but what about the science? We recently completed our first drilling season, reaching a depth of 736 m.

We are drilling an ice core at South Pole because of the unique climate here. South Pole is cold, even by Antarctic standards. It is the coldest spot for a deep drilling project by the USA. Other cores have been drilled at colder sites, but what makes the South Pole unique is that has received much more snow than those other sites.

More snow means higher resolution. Basically, if it snows twice as much, we collect twice as much ice for a given time period allowing us to make more detailed measurements. We also benefit from the atmosphere being trapped in the bubbles in the ice faster.

Once we have gotten the ice back to the US, we will begin the scientific analysis

South Pole Station from the Air

Here are some aerial photos of South Pole Station. I wish I had gotten to take them, but I found them on our common drive.

Above is an overview of the station. The main station is on the left with the berms stretching out above it. To the right are different science buildings. At the top right is our drill camp. 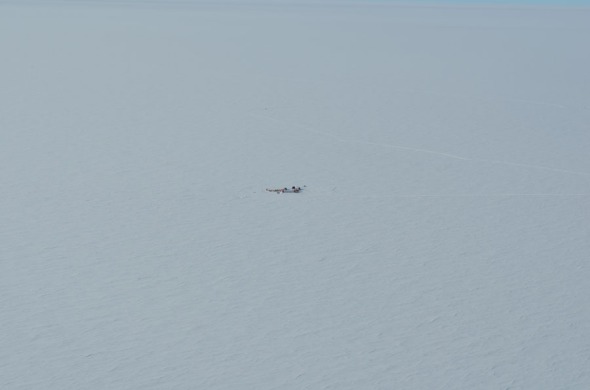 This photo gives a sense of the remoteness of the Antarctic Plateau. In reality, we are only a couple of kilometers away from the station.

Here is a close up of our drill site. At the top, the long red and white tent is our drill shelter. Moving down the picture, the brown building is Graceland, where we dry our drill suits to get the drilling fluid out. Next, the red and white square structure is the MEC, our warming area. The final building, a black rectangle, is The Duke, our outhouse. You can also see the red van we commute to the site in on the left of the MEC. The rest of the stuff is our equipment. There is a generator, barrels of drilling fluid, and lots of crates that we shipped the drill down in. 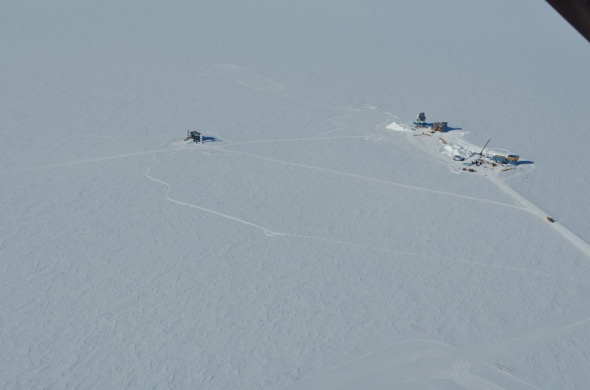 This is a photo of three different science buildings. On the left is the IceCUBE building. IceCUBE is a neutrino observatory that consists of 86 sensor string put into the ice between 1500 and 2500 m depth. Holes were drilled using hot water and then the sensors lowered down. On the right are two buildings for astronomy: BICEP2 which is looking at the Big Bang using long wavelengths and the South Pole Telescope.

This is the main station and the berms I mentioned above. The berms are where all the cargo that can freeze is stored. The cargo is put up on berms to minimize the amount of drifting snow that accumulates. The berms are in straight lines so that when they do get buried, you can easily find where to start shoveling.

Almost all of that cargo arrived by plane, as did all of the materials for the buildings. This is a shot of the airstrip where the Hercules LC-130s land, as well as smaller aircraft. About the only thing at South Pole that does not arrive by air is fuel, which in the last few years is being put in large bladders and pulled in by tractors from McMurdo.

Skiing Around the World

I went for my first ski today. There is an outbuilding with ski equipment for anyone to use while at the station. I picked out some skate skis, boots, and poles and headed out. The weather report says it was -29C (-24F) but when I checked a thermometer on our ice core pallets, it read -33C (-28F) making this the coldest ski of my life – I normally sip a hot toddie on days this cold. But it’s the South Pole, it doesn’t get a whole lot warmer.

As you can see, I was pretty bundled up. I had never used a face mask on my goggles before arriving at the South Pole. But the windchill is too much for my poor nose. It was a sunny beautiful day, but there was a breeze. The weather report currently gives the wind speed as 15 knots which gives a windchill of -44C (-48F). I think the wind has picked up in the couple of hours since I skied, but I can tell you I felt it going into the wind. You didn’t want any exposed flesh.

The skiing was actually pretty good. I even got a little glide where the snow was well-groomed. The constant sun must keep the snow temperature up a bit. There are no trails groomed for skiing here, so it’s a bit tricky crossing big ruts from heavy machinery. I skied on the skiway for airplanes, which was both slow and slick. I made the mistake of leaving the groomed roads and immediately got no glide with the rough snow crystals. Skiing to the Pole would have been a hell of a trial (but better than man-hauling).

On my way in, I stopped at the Ceremonial Pole.

I had yet to visit the Ceremonial Pole, but it does provide a nice selfie opportunity. And to make sure I had skied around the world, I lopped around the true geographic Pole before putting my skis away.

It was a fun ski around the world. 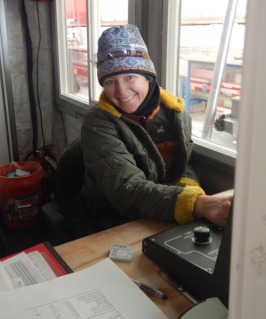 All of my posts so far have been about the things – the pole, the station, the travel. So I thought I should do a post on a person and Elizabeth, or E, was an obvious choice.

I first met E at the WAIS Divide drill site during the 2010-2011 Antarctic summer. She was a driller for the WAIS Divide ice core while I was core handler for the project. At that time, I also found out she was a fellow Polar Bear, having graduated from Bowdoin a few years before me.

E’s path to becoming an ice core driller was not a linear one. The short version is that she worked in Antarctica for the first time in the BFC, the Berg Field Center, at McMurdo Station which outfits science groups doing fieldwork. She was lured by the appeal of Antarctica as well as the seasonal work leaving her time to enjoy New Zealand on her return trip.

E’s talent for organizing people was quickly recognized, and it didn’t take long for her to become the camp supervisor at WAIS Divide. At the time, WAIS Divide was the largest field camp in Antarctica with a maximum population near 60 people. Keeping everything organized was no easy feat, especially with the notoriously bad weather disrupting supply flights, and even once shutting the camp down with no one allowed to move from the building they were in.

It must have been during that year that the appeal of ice coring took hold (and how couldn’t it?) and the next year she returned to WAIS Divide, switching from managing the camp to drilling the ice. She was part of the team that drilled the deepest US ice core ever and is leading to some fantastic science.

After that season, our paths parted until I flew up to Summit Station in Greenland for the test of the new ice-core drill we are using at South Pole. Arriving at Bear Camp, as our satellite camp was called, I was excited to see E there. I knew the drill would be in good hands. 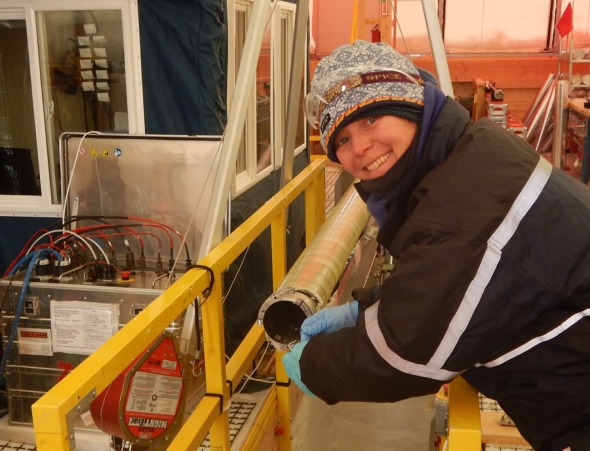 E has been fantastic to work with this season. She has established a fun, conscientious, safe, and very productive atmosphere that is leading to not only great ice core, but a great ice-core experience. As the season is winding down, her thoughts are turning to her house in New Zealand and spending time enjoying some sun in the outdoors.

On the snow. At elevation. In the cold. The conditions for the finish of the race:

I suffered while skate skiing for 45 minutes. They slogged for over 6 hours.

The course took them out past the South Pole Telescope, through the IceCube array, and to our drill site. And then back. The round trip distance was about 3.5 miles, so they did this seven times. And then added another partial loop to make it a full 26.2 miles.

They finished at the geographic South Pole to a small crowd of amazed fans.

Ryan and Mel ran together most of the way and finished within minutes of each other. 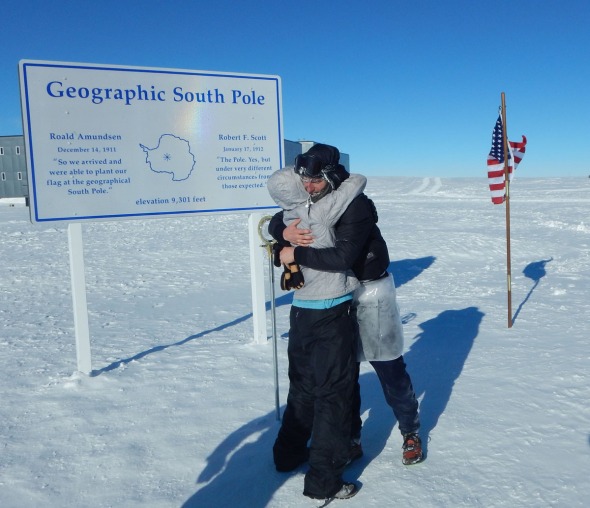