29. Has there ever been any catastrophes in Antarctica (maybe not while you were there but in the past)?

Good Question.  I am sad to report that the French Antarctic Program had four people die in a helicopter crash earlier this season.  The US air force was partially involved in the search for the helicopter and passengers after they lost radio contact.  If you are interested in learning more about the US involvement in this casualty, a friend in the air force wrote a nice blog post on it.

Tragedy on the Ice [Dispatches from Antarctica].

There are a couple of incidents that happened in the past on McMurdo base.  The locations of the injuries are documented in the map below.

1.  In 2000 a fall into a crevasse injured one person near the LDB road

3.  In 1986, two hikers were killed when they left the marked Castle Rock Loop trail and fell into a Crevasse 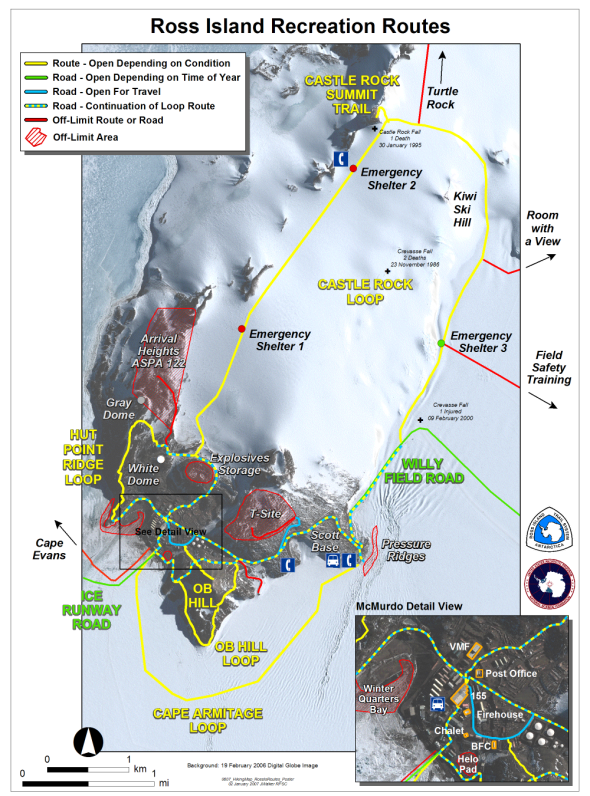 The hiking incidents are discussed in our Outdoor Safetly lecture as a reminder to stay on the trail and travel in groups.    There have been some other helicopter crashes in the past, but I do not know the details.  While the clinic has a MCI (Mass Casualty Incident) plan in place, the major focus is on prevention.  We hope for no further incidents this year and our thoughts are with the French research family this season.