Fata Morgana is a type of superior mirage that is seen as a band just above the horizon.  The first time I saw it, I thought I was seeing things.  And I guess I was. . .

The image is distorted, and often unrecognizable, because the mirage is made up of multiple upside down and right side up images stacked on top of each other with alternating stretch and compression zones.  This optical illusion occurs when a ray of light passes through different temperature air layers causing it to bend — usually occurring during a thermal inversion.   Most commonly, Fata Morgana occurs in polar regions over large sheets of ice with uniform low temperatures, which is why we often see it off in the distance.  You can sit and watch the Fata Morgana change over time.  I have not had my camera to capture the phenomenon.  Luckily, on a recent walk, Kressley took a photo for me to share with you all.  It captures the Fata Morgana perfectly! 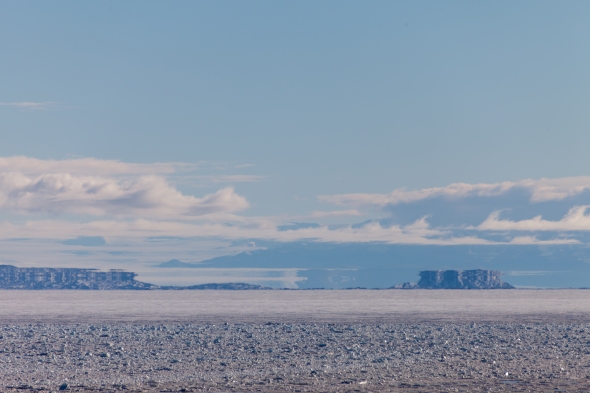 On a different day, the island to the right looks like a regular island. Fata Morgana is named for Morgan Le Fey, the half-sister of King Arthur, who was able to change shape at will.

This entry was posted on January 31, 2011 by Jessie. It was filed under Antarctica, Jessie's Updates, McMurdo . 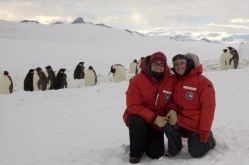