Sleigh Ride to the South Pole!

I had another amazing opportunity — To travel by C-130 to the South Pole.  Since it was a fuel drop mission, we flew to the south pole, had 30 minutes to explore the bottom of the world, and then flew back to McMurdo.  The 6 hour flight was well worth the 30 minutes on the ground.  The flight itself was gorgeous.  There are a couple of windows on the C-130 so we could see and photograph the sites.

The views were phenomenal!  Since my last aerial slide show had good feedback, I will post another slide show from this flight in a couple of days.

We landed on a vast expanse of white.  It was cold and windy.  But the excitement of the experience made the weather not seem so bad.  Unlike McMurdo, the skiway is very close to the South Pole Base.  The main station is pictured below.  It is much smaller than McMurdo!

We walked past the ceremonial pole, located in front of South Pole Station, to see the Geographic South Pole.  Each year the winter over crew designs and creates the pole marker for the geographic pole at 90 degrees south.  On January 1st of each year, there is a ceremony to place the new marker.  The marker has to be placed in a new position every year because it is on an ice sheet!  The ice sheet moves approximately 10 meters per year towards the Weddell sea so the position of the station and marker shifts in relation to the geographic south pole.

This year, they celebrated the 100th anniversary of Amundsen’s arrival at the pole and 100 years of exploration.  It was created in the shape of a sextant – an instrument used for navigation by early explorers.  The 47 degrees on the Sextant represents the 47 winterovers at the pole last winter.

Then we rushed to the more well recognized, Ceremonial South Pole.  The position of this marker never changes in relation to the station.  We walked around the world in less than 30 minutes! 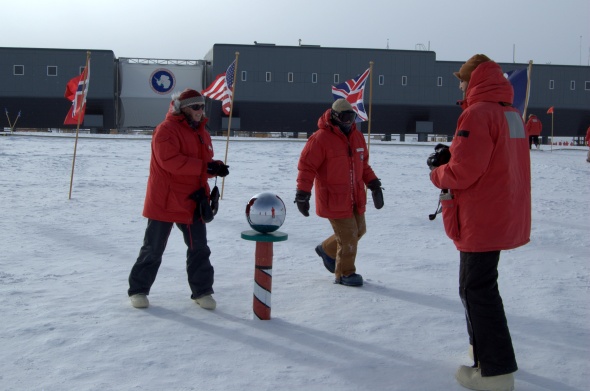 And a self portrait of Christine and I:

And then, our time was up.  I had time to give hugs to friends at the Pole.  Then we boarded the plane back to McMurdo. 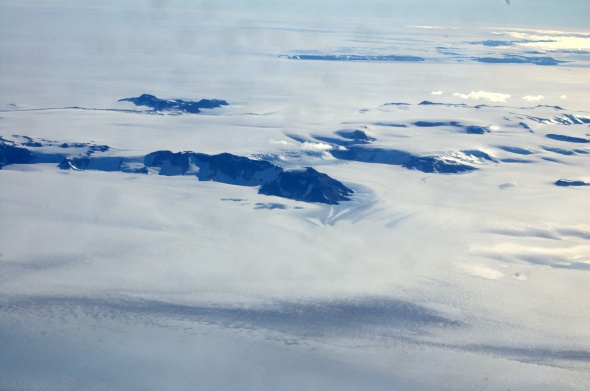 This entry was posted on January 29, 2011 by Jessie. It was filed under Antarctica, Jessie's Updates .